Efficacy and safety of dupilumab for the treatment of moderate-to-severe atopic dermatitis in adults: A pooled analysis of two phase 2 clinical trials

Journal of the American Association of Nurse Practitioners

Background and purpose: There is a need for new treatment options for moderate-to-severe atopic dermatitis (AD) in adults. Dupilumab, a fully human anti-interleukin-4 receptor α monoclonal antibody, has recently been approved for this indication.

Methods: A pooled analysis of a phase 2a (NCT01548404) and a phase 2b (NCT01859988) study and a subanalysis of the 2b study evaluated the efficacy and safety of subcutaneous dupilumab 300 mg once weekly (qw) and every 2 weeks (q2w) in adults with moderate-to-severe AD.

Conclusions: Consistent with previous studies, dupilumab qw and q2w significantly improved signs and symptoms of AD at week 12, including improvements in itch and sleep loss.

Implications for practice: Subcutaneous dupilumab is an effective new treatment option for adults with moderate-to-severe AD.

Skin disorders are the most common types of disease seen by health care professionals and the most frequently reported occupational health problem resulting in absenteeism in the general population (Peate, 2011). Atopic dermatitis (AD), or atopic eczema, is a common chronic inflammatory skin disorder that follows a relapsing course and is characterized by intense itch, disruption of the skin barrier, and type 2/T helper type 2 (Th2) cytokine-mediated inflammation (Eichenfield et al., 2014a ; Moreno, McPhee, Arruda, & Howell, 2016 ; Peate, 2011 ; Ring et al., 2012a). Th2 cytokines are increased in AD lesions and, to a lesser extent, in nonlesional skin (Suárez-Fariñas et al., 2011). Atopic dermatitis is also frequently associated with increased serum immunoglobulin E (IgE) levels and a family or personal history of asthma, allergic rhinitis, or type I allergies (Eichenfield et al., 2014a).

Atopic dermatitis occurs most frequently in childhood (affecting up to 25% of children) but also occurs in adulthood. The lifetime prevalence of AD in adults is approximately 2%–10% (Bieber, 2010), whereas the 1-year prevalence of AD in adults in the United States has been estimated to be approximately 3% (defined as eczema with asthma/hay fever) (Silverberg & Hanifin, 2013). Approximately 20% of adults with AD have moderate-to-severe disease (DaVeiga, 2012). Skin lesions in moderate-to-severe AD are widespread and appear as erythematous papules and plaques with xerosis, edema, scaling, crusting, excoriations, oozing, lichenification, infiltration, and papulation, which can all vary by age (Bieber, 2010 ; Eichenfield et al., 2014a).

Effective treatment options are needed to address the significant burden of illness of AD in adults (Whiteley et al., 2016). Currently available treatment options for moderate-to-severe AD such as topical corticosteroids (TCSs), topical calcineurin inhibitors (TCIs), systemic treatments, including traditional immunosuppressants, or phototherapy are not recommended for long-term use (Eichenfield et al., 2014a , 2014b ; Garritsen, Brouwer, Limpens, & Spuls, 2014; Katayama et al., 2017; Ring et al., 2012a , 2012b ; Sidbury et al., 2014a , 2014b).

Dupilumab is a fully human monoclonal antibody, directed against the interleukin [IL]-4 receptor α (IL-4Rα) subunit, that inhibits signaling of both IL-4 and IL-13, which are key drivers of Type 2/Th2-mediated inflammation (Blakely, Gooderham, & Papp, 2016 ; Gandhi, Pirozzi, & Graham, 2017 ; Hamilton et al., 2014). Dupilumab was approved in the United States by the Food and Drug Administration (FDA) on March 28, 2017, for the treatment of adults with moderate-to-severe AD whose disease is not adequately controlled with topical prescription therapies or when those therapies are not advisable (Food and Drug Administration, 2017). Dupilumab is also approved by the European Medicines Agency (EMA) for use in adults with moderate-to-severe AD who are candidates for systemic therapy (European Medicines Agency, 2017). In phase 2 and 3 clinical studies, dupilumab has been shown to reduce disease severity in patients with moderate-to-severe AD and to have an acceptable and favorable safety profile (Beck et al., 2014 ; Blauvelt et al., 2017 ; Simpson et al., 2016b , 2016c ;Thaçi et al., 2016). In addition, dupilumab has been shown to improve patient-reported outcomes (PROs) and patient QoL (Simpson, 2017a ; Simpson et al., 2016b , 2016c).

Both the phase 2a and phase 2b clinical trials of dupilumab were multicenter, randomized, placebo-controlled, and double-blinded. In the phase 2a study (ClinicalTrials.gov Identifier: NCT01548404), patients were enrolled at 23 study sites in the Czech Republic, France, Germany, Hungary, and Poland (Beck et al., 2014). A total of 109 patients were randomized to either s.c. dupilumab 300 mg qw (n = 55) or placebo (n = 54). The study drug was given qw for 12 weeks.

In the phase 2b study (ClinicalTrials.gov Identifier: NCT01859988), patients were enrolled at 91 study sites in Canada, the Czech Republic, Germany, Hungary, Japan, Poland, and the United States (Thaçi et al., 2016). A total of 124 patients were randomized to either s.c. dupilumab 300 mg (n = 63) or placebo (n = 61). The study drug was given qw for 16 weeks. Lower doses of dupilumab were also included in this study (200 mg q2w, 300 mg q2w, 300 mg q4w, and 100 mg q4w), but these were not included in the pooled analysis (to enable data pooling). The 300 mg q2w dose is presented as a separate analysis, as this dose was subsequently approved. A loading dose of dupilumab 600 mg was administered to patients randomized to receive dupilumab 300 mg qw or q2w.

The safety follow-up period for both studies was 16 weeks. Patients were required to use a topical emollient (moisturizer) for ≥7 days before and 7 days after baseline (day -7 to day 8). Rescue medication for AD (including but not limited to TCIs, TCSs, and systemic treatmentoptions for AD) could be given at the investigator's discretion; patients receiving rescue medication were discontinued from study treatment and counted as nonresponders in all analyses.

Enrolled patients were adults (aged ≥18 years) and had AD for at least 3 years before screening, an Eczema Area and Severity Index (EASI) score at baseline of at least 16, an Investigator's Global Assessment (IGA) score at screening and baseline of at least 3, at least 10% of body surface area affected by AD at screening and baseline, and a history of inadequate response to TCSs or TCIs within three months (phase 2a study) or 6 months (phase 2b study) of enrollment.

For the pooled analysis, efficacy and safety data through week 12 were pooled from the dupilumab 300 mg qw and placebo groups in both clinical trials. The phase 2b subanalysis included efficacy data through week 12 and safety data through week 16 for the dupilumab 300 mg q2w and placebo groups, using data from the phase 2b clinical trial only. For EASI, SCORAD, peak pruritus NRS, SCORAD VAS pruritus, 5-D pruritus, and SCORAD VAS sleep loss scores, data are reported as least squares mean percent change (±standard error); for other efficacy end points, data are reported as the proportion of patients.

The range, recall period, and assessment frequency of these clinician-reported outcomes and PROs are summarized in Table 1. Analysis of covariance was used (with treatment and baseline as covariates) to compare percent changes; a χ2 test was used for proportions. Safety was summarized using descriptive data. All statistical tests were two sided, and p ≤ .05 was considered statistically significant. Missing data, data recorded after dropout, and data recorded after rescue treatment were accounted for with the last observation carried forward method for continuous end points. The proportions of patients with EASI-50/75/90 or SCORAD-50/75/90 included all recorded values with censoring after rescue drug use. Analyses included all randomized patients who received at least 1 dose of the study drug. 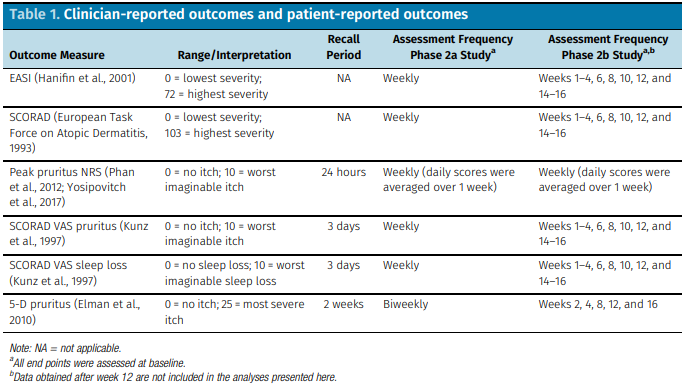 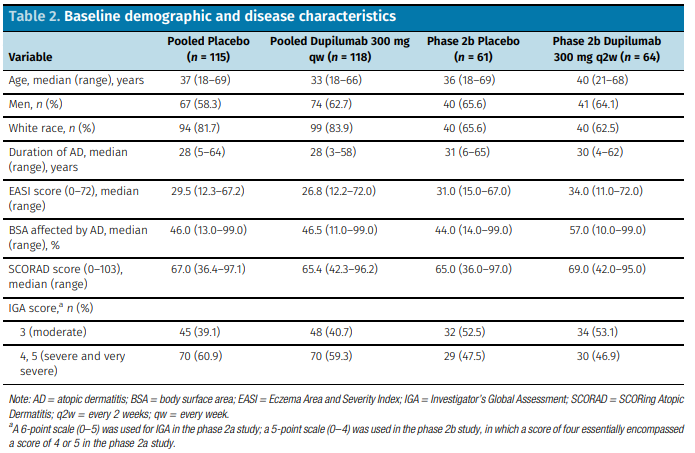 Dupilumab treatment resulted in a significant improvement (reduction) of disease severity in both the pooled analysis and the phase 2b subanalysis, with significantly greater improvements in the EASI (Figure 1) and SCORAD (Figure 2) scores observed from week 1 to 12 in patients treated with dupilumab compared with placebo in both analyses (p < .0001 vs. placebo for all comparisons). 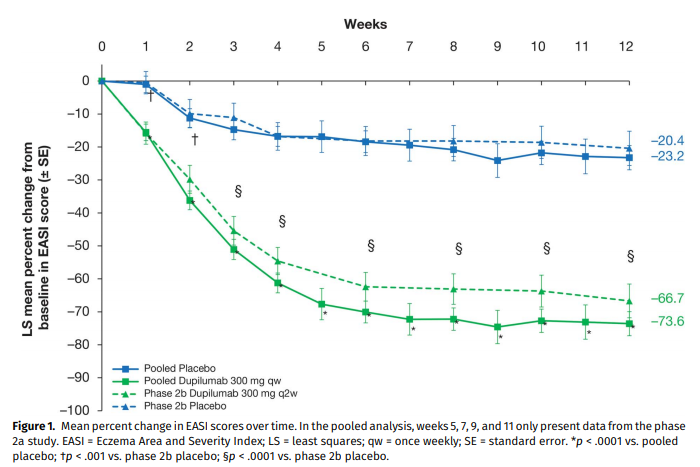 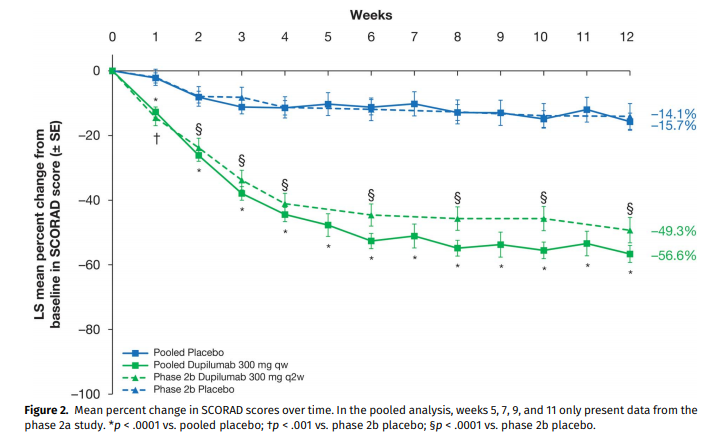 A higher proportion of patients treated with dupilumab 300 mg qw or 300 mg q2w showed decreased pain/discomfort at week 16 in comparison with placebo (Table 4). 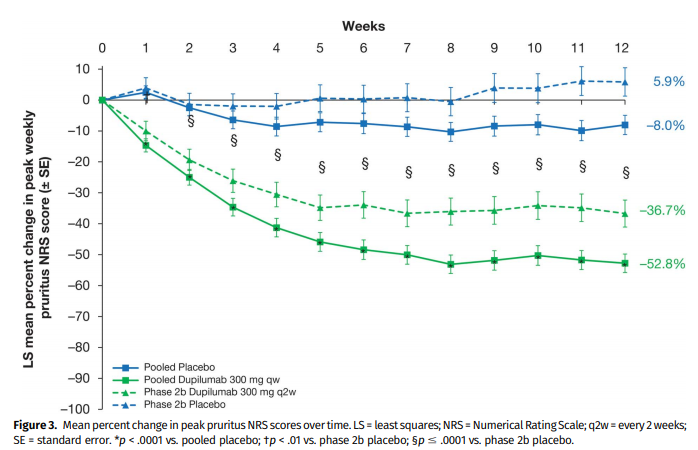 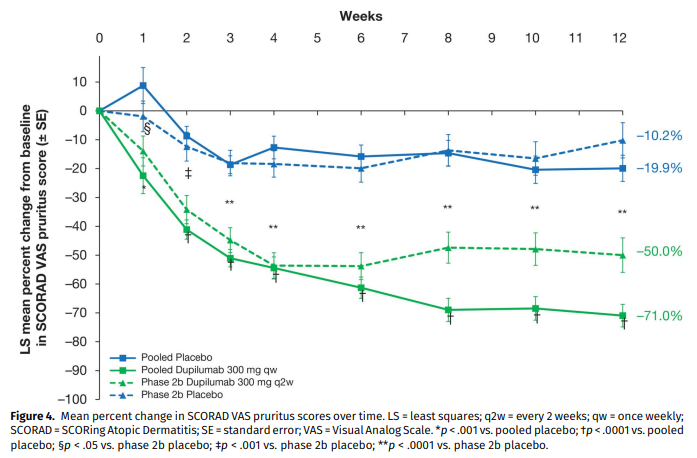 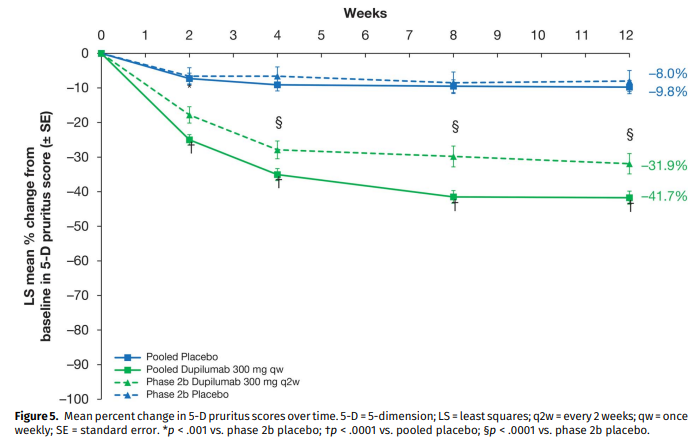 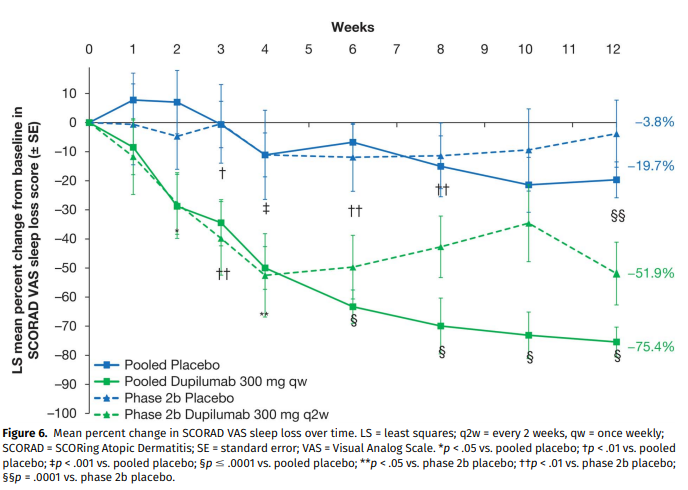 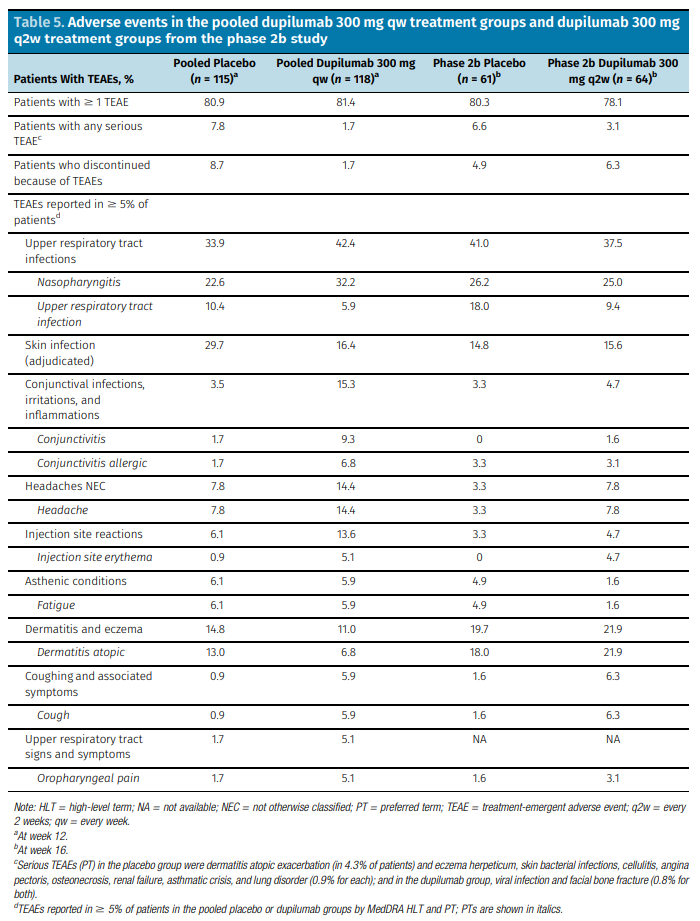 In the pooled analysis, fewer patients receiving dupilumab 300 mg qw compared with placebo discontinued from the study (1.7% vs. 8.7%). In the phase 2b subanalysis, 6.3% and 4.9% of patients in the dupilumab 300 mg q2w and placebo groups, respectively, discontinued from the study. No deaths occurred during either study. Further details on safety have been previously published (Beck et al., 2014 ; Thaçi et al., 2016).

The efficacy and safety results reported here are also similar to those of three phase 3 studies in patients with moderate-to-severe AD (Blauvelt et al., 2017 ; Simpson et al., 2016c). In two phase 3 studies comparing dupilumab with placebo, dupilumab qw and q2w significantly improved EASI and SCORAD (both p < .001) and peak pruritus NRS (p < .001) scores and significantly improved the proportion of EASI-75 responders versus placebo at week 16 (p < .001 vs. placebo) (Simpson et al., 2016c). Furthermore, the combined efficacy of dupilumab demonstrated in these analyses of adults with moderate-to-severe AD validates the role of the Type 2/Th2 cytokines IL-4 and IL-13 in the pathogenesis of AD (D'Erme et al., 2017 ; Gandhi et al., 2017) and the importance of their inhibition for the treatment of AD (D'Erme et al., 2017 ; Gandhi et al., 2017 ; Hamilton et al., 2014).

Dupilumab has recently been approved for use in adult patients (October 2017), so experience of dupilumab in the primary care practice setting is limited. In line with the FDA and EMA product labeling (European Medicines Agency, 2017 ; Food and Drug Administration, 2017), the International Eczema Council recommends the use of systemic therapies such as dupilumab if intensive topical therapy has been unsuccessful in adults with moderate-to-severe AD (Simpson et al., 2017b). The analysis reported herein excluded patients who used topical prescription medications within 1 week; however, in the clinical practice setting, these patients may continue to use topical prescriptions when initiating dupilumab (Food and Drug Administration, 2017). Dupilumab has demonstrated efficacy in reducing disease severity in adults with moderate-to-severe AD along with an acceptable safety profile (Beck et al., 2014 ; Blauvelt et al., 2017 ; Simpson et al., 2016b , 2016c ; Thaçi et al., 2016); as the product label does not require immunosuppression, close monitoring, laboratory testing, or treatment adjustments (Food and Drug Administration, 2017), dupilumab is suitable for use by primary care physicians for the management of these patients. A health care provider (i.e., nurse) should provide guidance with the administration of s.c. dupilumab q2w, which can be self-injected by the patient and/or caregivers once training is provided (Food and Drug Administration, 2017). Patients treated with dupilumab should avoid live vaccines. In a clinical study of patients with AD, dupilumab did not indicate clinically relevant effects on CYP450 enzymes, including CYP1A2, CYP3A, CYP2C19, CYP2D6, or CYP2C9 activity (European Medicines Agency, 2017; data on file).

This report has several limitations. These include a short time duration to assess efficacy, safety, and QoL, and a homogeneous study population in terms of race. To enable pooling of data from two phase 2 studies that had different double-blind treatment durations, data from the phase 2b study were truncated at 12 weeks. Safety data are limited to week 12 in the pooled analysis and to week 16 in the phase 2b subanalysis and do not include posttreatment adverse events.

In adults with moderate-to-severe AD, this pooled analysis of two phase 2 studies demonstrated that s.c. dupilumab 300 mg qw significantly improved AD severity, itch, and sleep loss at week 12 compared with placebo. A subanalysis of the phase 2b study confirmed that dupilumab 300 mg q2w also significantly improved these same symptoms at week 12. Improvement in itch relative to placebo occurred as early as week 1 and improvement in sleep loss occurred as early as week 2. In both analyses, dupilumab had an acceptable and favorable safety profile. Dupilumab is the first biologic agent to be approved for the treatment of adults with moderate-to-severe AD and is a promising therapy option.

D’Erme, A. M., Romanelli, M., & Chiricozzi, A. (2017) Spotlight on dupilumab in the treatment of atopic dermatitis: Design, development, and potential place in therapy. Drug Design Development and Therapy, 11, 1473–1480.

Silverberg, J. I., & Hanifin, J. M. (2013). Adult eczema prevalence and associations with asthma and other health and demographic factors: A US population-based study. Journal of Allergy and Clinical Immunology, 132, 1132–1138.